Tiffany has enlisted the couple Beyoncé and JAY-Z and a super diamond for the new communication campaign. Tiffany ABOUT LOVE marks the latest evolution of the new creative direction of the bran that passed under the banner of the LVMH group. “Beyoncé and JAY-Z are the epitome of the modern romance. As a brand that has always been synonymous with love, strength and self-expression, we couldn’t think of a more iconic couple that better represent Tiffany’s values. We are honored to have the Carters as part of the Tiffany family, ”commented Alexandre Arnault, Executive Vice President of Product and Communications. 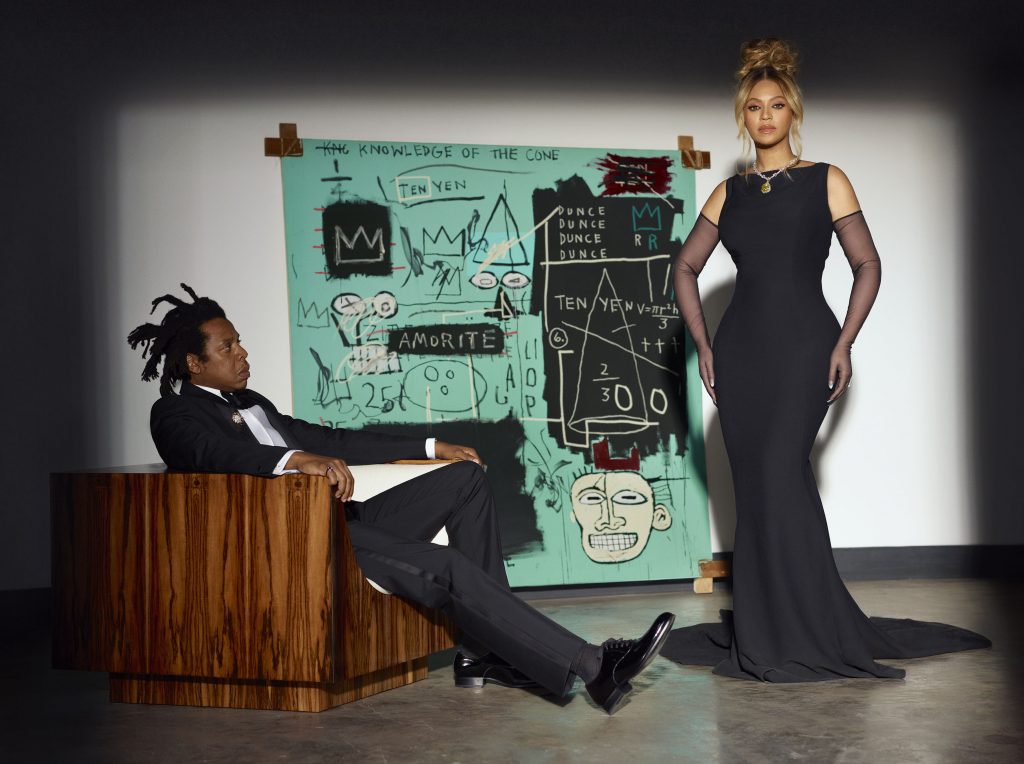 The Carters’ love story is the backdrop to the super diamond Tiffany and is set with the contribution of Equals Pi (1982) by Jean-Michel Basquiat. Worn in a campaign for the first time in history, the Tiffany Diamond weighs 128.54 carats and boasts 82 facets, about thirty more than the common brilliant-cut diamond. Discovered in 1877 in the Kimberley mines in South Africa, founder Charles Lewis Tiffany bought the diamond in the rough in 1878, solidifying the brand’s reputation as an authority in the diamond industry. The icons of the house, including designs by Jean Schlumberger and the Tiffany T collection, are also present everywhere. In particular, JAY-Z wears Jean Schlumberger’s legendary Bird on a Rock brooch, reconstructed as a one-of-a-kind pair of cufflinks. Jean Schlumberger was best known for dressing up the high society elite in the 1960s and 1970s, so it’s fitting that his unmistakable models live his legacy on one of today’s greatest creative forces. A film by acclaimed director Emmanuel Adjei has also been created and features a musical performance of the classic song “Moon River”.

Made famous in the 1961 film Breakfast at Tiffany’s, the iconic melody is reimagined with Beyoncé’s voice, captured by JAY-Z on a Super 8 camera. The couple chose the Orum House in Los Angeles as the setting for the film. in which nostalgic flashbacks intertwine with cinematic and dreamlike images. The accompanying “ABOUT LOVE” print campaign was shot by Mason Poole and stylized by June Ambrose and Marni Xenophon. The accompanying film will launch on Tiffany.com on September 15 and will be amplified through global media activations. The campaign will develop further later this year with more films created by acclaimed director Dikayl Rimmasch and second unit director, Derek Milton.

Beyoncé is, for all intents and purposes, Miss Tiffany. The American Maison, in fact, continues to

Beyoncé has been the number one star accompanying Tiffany’s communication for some years. The contact and

The couple Tiffany, Beyoncé and Jay-Z, protagonists of the About Love advertising campaign, are now also

New Tiffany bracelets. They are those of the Lock collection, a line
Goodbye old Tiffany, the new Tiffany is born, which leaves the image
Tiffany’s list gets longer. No, not that of the jewelry collections. The
News for the summer signed by Tiffany & Co. The American company
Tiffany has always defined her jewels as small works of art. And